At the beginning of the film Smoke (1994), one of my favourite films, William Hurt mentions that Walter Raleigh was a favourite at the Court of Queen Elisabeth I and that smoking (Raleigh had discovered tobacco) had caught on at the court. He said that Raleigh once made a bet with Elizabeth that he could measure the weight of smoke. Told

it was impossible, like weighing someone’s soul, he took an unsmoked cigar and weighed it on a balance before lighting up and smoking it. He carefully tipped the ashes into the balance pan. When he was finished he put the butt alongside the ashes and weighed what was there. Then he subtracted that weight from the original weight of the unsmoked cigar. The difference was the weight of the smoke.

Later in the same film Hurt tells Rashid the story of Bakhtin, caught in the Siege of Leningrad in 1942. He’s holed up in an apartment expecting to die any day. He has plenty of tobacco but no paper. Desperate, he took the pages of a manuscript he had been working on for ten years. He tore up his manuscript and rolled cigarettes from the pieces. Rashid asked if it was his only copy. Hurt says that it was and ‘You think you’re gonna die, what do you want? A good book or a good smoke?’ So he huffed and he puffed and little by little he smoked his book.

I quit smoking in December. I’m really depressed about it. I love smoking, I love fire, I miss lighting cigarettes. I like the whole thing about it, to me it turns into the artist’s life, and now people like Bloomberg have made animals out of smokers, and they think that if they stop smoking everyone will live forever.

I recently started smoking again after 3 years, the longest period I’ve managed to stop. I wasn’t even missing smoking at all, had got past all the withdrawal symptoms and thought of myself as a non-smoker for the rest of my life. A drink with an old friend, a cigarette, convincing myself I’d only have a couple and I was hooked again. Not only hooked but now I don’t want to stop; it’s too late – I enjoy smoking. If you’ve never been a smoker then I suppose it’s hard to understand, but the response of Bakhtin was the action of an addict – I am an addict. I started through boredom with my job at seventeen and now I’m stuck with it.

He found a tree that had not been damaged by shellfire and sat down beneath it, lighting a cigarette and sucking in the smoke. Before the war he had never touched tobacco; now it was his greatest comfort.

Although I am a smoker I never, when I had given up, looked down on those who smoked. I did reach a stage where I felt sorry for them, thought of the health damage and the expense, but I would never object to anybody smoking anywhere, even in my own house. In years to come we will probably look back and consider smoking insane, but for now it persists. I accept that people should not be subjected to other people’s smoke in restaurants and pubs, but to ban it everywhere is ridiculous; there should be smoker’s pubs and smoking rooms in non-smoking areas. The Health Police have gone too far.

Whatever Aristotle and all the philosophers may say, there is nothing equal to tobacco. All good fellows like it, and he who lives without tobacco does not deserve to live.

Smoking is supposed to aid writing; it certainly feels as though it does. I smoke loads as I write. When I didn’t smoke I continued to write. I look back and find stuff I wrote then and some of it is rather good. It just didn’t feel as though it was good. I am undecided. While I was a non-smoker I became a recluse; I didn’t go out and I didn’t travel because the temptation to smoke would have been too great. I think I have just been smoking for too long to stop. Who knows what I would have written if I hadn’t started. But I did.

I read in the current Time Magazine that you are ill. I just want you to know that I am rooting for your quick recovery. First because of your contribution to literature and, then, the fact that under the most trying conditions you never stopped smoking cigars.

Hurry up and get well.

It’s very hard to explain to non-smokers why you smoke. You smoke because you’re addicted and you enjoy being addicted. Look at any film before the eighties and everybody is smoking. The tobacco companies held sway then; they had convinced enough people that it did not damage your health and we wanted to believe them. There wasn’t a big movement against smoking then; too many people did it. Now the anti-smoking brigade hold sway; it’s mainly poor people that smoke, and the citizens of poorer countries where the tobacco companies can still influence young people. I suppose it’s crazy, a really stupid thing to do, but it has its attractions. The writer Iain Banks died last year. He was diagnosed with terminal gall bladder cancer and died very soon afterwards at the age of 59. I had enjoyed some of his books many years ago and remembered a passage from Complicity (1993).

We tried another cigarette, and by then I’d – maybe instinctively – sussed how to handle it. I sucked that smoke in and made it part of me, joined mystically with the universe right at that point, said Yes to drugs forever just by the unique hit I got. It was a revelation, an epiphany… this was better than religion…I became a semi-junkie that day, that afternoon, that hour. It was that virginal rush of toxins to the brain…truth and revelation. What really works.

Although the above is taken from a novel, I’ve no doubt those were Banks’ thoughts too. He met his sudden death with equanimity. I do not know how much he regretted it, how much longer he would have liked to live. Longer I’m sure. I remember a cartoon I saw somewhere: two decrepit old men sit in an old people’s home in wheelchairs.

says one to the other

‘if we hadn’t looked after ourselves we would have missed all this.’

Of course that leaves out the often terrible deaths suffered by smokers. We all think it won’t happen to us.

Although I don’t think I’ll attempt to give up again, I’d like to try electric cigarettes. I’ve bought some but haven’t got round to trying them yet in case they don’t work. The Health Police are banning the advertising of them and are trying to ban the cigarettes too; their reasoning being that they fear people will try them and then take up smoking, when it’s obvious that the opposite is happening – people are using them to try to stop smoking. I’m encouraged that a serial smoker like Martin Amis is using them. If they work for him…well, I’ll try them soon.

On the wall was a sign bearing the saddest words Keith had ever read. 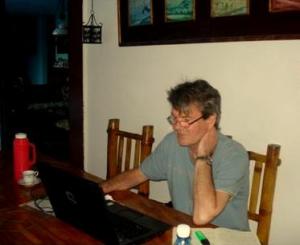