Shakespeare left school well equipped. By the time a grammar-school boy left his school he had as much classical education as a university student of Classics today. Of course education does not stop on leaving school. Shakespeare read medieval poetry (Chaucer, Gower), Italian fiction (Boccaccio, Cinthio), contemporary history (Holinshed), ancient history (Plutarch), contemporary romance (Philip Sydney, Robert Greene), Greek romance (Apollodorus), and contemporary philosophy (Montaigne).  Richard Field, a printer, was a contemporary of Shakespeare in Stratford and the printer of his first poems. It is remarkable that Field also printed many sources of Shakespeare’s plays: Ovid, Plutarch and Holinshed, three of Shakespeare’s favourite texts. It is clear that Shakespeare kept up with new ideas and literary discoveries as they reached the English market.

It is often alleged that the level of technical knowledge of certain areas of Shakespeare’s plays – such as the law or the court – is not compatible with that of a grammar-school boy. This strange assertion is often behind attempts to prove that Shakespeare was not the man from Stratford. Thus an argument is created that for legal knowledge the plays must have been written by a lawyer (Francis Bacon) or that for knowledge of the court the plays must have been written by an aristocrat (the Earl of Oxford). Similar arguments have been made for Shakespeare’s knowledge of birds, botany or seafaring. This is a very strange line of thought. It assumes that authors depend on their own professional experiences. Shakespeare did not need to be a lawyer to gain legal knowledge, especially in extremely litigious Elizabethan times; he was involved in at least six legal cases himself. Court life was familiar to Shakespeare, especially after the Chamberlain’s men were invited to perform there. To believe that only lawyers can make legal references or that only aristocrats know of the court, misses a crucial aspect of being a writer: imagination. Added to the undoubted research that Shakespeare indulged in, there is nothing in his plays that could not have come from close observation of the world around him; of human idiosyncrasy, hypocrisy, humanity, compassion, politics and paradoxes.

Shakespeare was intellectually proximate with Montaigne. Montaigne was a psychological philosopher, whereas Shakespeare was psychological dramatist. Gonzalo’s speech on the ideal commonwealth in The Tempest comes from Montaigne’s essay On Cannibals. Montaigne’s influence on Shakespeare’s language is interesting. Montaigne’s Essays were introduced to the English speaking world in 1603. Shakespeare must have read it because after 1603 Coffin Taylor identified 750 parallels, words and phrases that were not in Shakespeare’s language before. All the examples are too numerous to mention, but there is ‘concupisible’ in Montaigne (translated)  and Measure for Measure; ‘harping’ and ‘pregnant wit’ in Montaigne and Hamlet and ‘chirurgions’ in Montaigne and The Tempest. Many, many new words and phrases appeared in tandem with Montaigne after 1603. The Earl of Oxford died in 1604.

Another strange question regarding Shakespeare involves travel. How did he gain knowledge of ancient Greece (A Midsummer Night’s Dream, Timon of Athens, Troilus and Cressida), ancient Rome (Julius Caesar, Coriolanus, Romeo and Juliet), Egypt (Cleopatra) and ancient Britain (King Lear, Cymbeline). Well, the answer is obvious: he didn’t go to these places; he read about them. Nothing in Shakespeare’s use of foreign locations requires more knowledge than might be gained easily from reading or gained from an existing story. Shakespeare set Romeo and Juliet in Verona because that is where Arthur Brooke set the poem that is the play’s source. If he didn’t already have a story to adapt then there is nothing in the plays that could not be discovered from reading Plutarch or Ovid.

Anti-Stratfordians have often claimed that Shakespeare’s plays require direct knowledge of foreign locations and that, since there is evidence that Shakespeare never travelled, the plays must have been written by someone who travelled to Europe. This is a ridiculous argument. Edward de Vere travelled in Europe as a young man in the 1570s. This is often cited as one of the reasons why he, and not Shakespeare, wrote the plays and poems. Although the travel may open up the possibility of his being the author, his rather negligible poetic skill somewhat diminished his claims. Shakespeare’s career shows that it is possible to write great plays without actually visiting the places those plays are set in. Oxford shows us, very clearly, that travel does not necessarily lead to great writing.

To me, the fact that Oxford died in 1604 rather discounts him anyway, and, of course, he made no claims himself. To get around that fact we have all sorts of conspiracy theories from people desperate to believe that the plays were not the product of the ‘self-satisfied pork butcher’ from Stratford. Shakespeare was an ordinary man with an extraordinary talent. Some people find that hard to accept. Poor them. 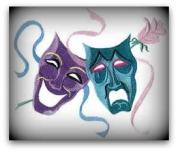 “It is not in the stars to hold our destiny but in ourselves.”

My first experience of Shakespeare was a performance of The Tempest on a school trip; I hated it. Three years later I was given a copy of Macbeth as one of my ‘O’ Level books: I loved it. I read it and studied it and wrote about it. I achieved a good grade. After that, until I reached middle-age, I had very little to do with Shakespeare; I don’t enjoy the theatre much and found his plays difficult to follow. I went to see Roman Polanski’s Macbeth at the cinema in the 70s and loved that (it is still the best version), but It was only when I began helping students with their English that I started to appreciate him, and, only then, through the filmed versions.

Since then, having studied him on and off for a few years, I have discovered that I like Romeo and Juliet, Othello, The Merchant of Venice, A Midsummer Night’s Dream, As You Like It and A Winter’s Tale; I love Macbeth but baulk at the walking wood. I don’t like Hamlet or King Lear. I do like Julius Caesar, Troilus and Cressida, Measure for Measure and Coriolanus, all rarely performed, although Coriolanus does seem to be having a revival, partly due to its supposed similarities with today’s society.

All of the Henry plays are good but particularly Henry VIII, one of the least performed. I like Richard II and love Richard III, even though it is a complete fiction (Tudor propaganda); I like Much Ado About Nothing but don’t yet understand The Tempest; Anthony and Cleopatra is marvellous; I enjoyed bits of Cymbeline, but the version I watched had a young Helen Mirren dressed as a boy (impossible to believe). I don’t like Pericles or The Taming of the Shrew. I am indifferent to Love’s Labour’s Lost, Twelfth Night and All’s Well that Ends Well. I know nothing about the Two Gentlemen of Verona, A Comedy of Errors, The Merry Wives of Windsor or King John.

I think that just about covers them all; forgive me if I have forgotten anything. I enjoy watching Hamlet even though I don’t like him. Such a fuss is made about his tortuous journey and his suffering and tragic death, but I just find him a terrible whinger and get fed up with him very quickly. He is responsible for the deaths of Polonius (harmless old fool), Rosencrantz and Guildenstern (to be fair they would have had him killed otherwise, but only because of his awful behaviour), his mother and Ophelia, the one true innocent in the play. I found Ophelia the only sane person in the play and she is destroyed by Hamlet. Kenneth Branagh’s four hour film is quite entertaining but the best I’ve seen so far is Zeffirelli’s version with Mel Gibson.

King Lear and Hamlet are two of the most popular plays today. It is easy to obtain copies of performances and there are many films of both; I have seen quite a lot of them (the best King Lear is a Russian version by Grigori Kozintsev). As I said, I enjoy watching performances of Hamlet but have no sympathy at all with the play’s theme, which to me is: spoilt, self obsessed brat prattling on endlessly about his problems and dealing with them far too late, thereby causing the deaths of many. I suppose I get fed up with critics taking Hamlet (the character) so seriously (I grant his language is wonderful) when I find him very unlikeable.

King Lear is a play often performed and analysed. I hope I’m wrong, and one day might be convinced otherwise, but I find the whole thing ridiculous. I know it is about a foolish old man mistaking flattery for love and not recognising true love, of not understanding that the giving away of territory would change everything – of not understanding anything until it is too late; but it is told in such convoluted fashion, with too many characters and too many ridiculous scenes. I cannot watch the scene on the beach near the end without laughing.

I find Macbeth one of the most watchable of plays, partly because it is so short (the shortest). Its theme is simple: overarching ambition and female manipulation. There are one or two parts where I have to suspend disbelief: the walking wood, Lady Macbeth collapses into madness too quickly, but it is a marvellously entertaining example of what Shakespeare was best at: taking basic human emotions and dramatising them; of course all drama should do this but only Shakespeare did it so well.

One thing that stands out in all the plays though, is the language; there is wonderful language in all the plays. I’ll make a ridiculous understatement and say that Shakespeare had a way with words. Like no other before him or since, he could encapsulate the most profound thoughts and feelings in what is, when studied, beautifully simple language. His best plays are a joy throughout – I can watch them once or twice a year. The recent BBC series of Richard II, Henry IV parts 1 & 2 and Henry V was superb.

The way I found access to Shakespeare was through film. Watching his plays in the theatre I find that, unless one knows the play by heart (difficult), the language is lost – while thinking about one line, it is quickly followed by another and another and so much is lost, simply because it is impossible to keep up. With film, and today almost everything has subtitles, it is possible to pause and think, to absorb and understand and thereby find a way in to the plays.

This has been only a brief and haphazard introduction into my thoughts on Shakespeare. I have already written a rather self-indulgent review of Throne of Blood, Kurosawa’s film version of Macbeth. But bear with me. I would like occasionally to share my thoughts on Shakespeare, particularly the ridiculous authorship controversy, in the future. How do other writers feel about this – any other Shakespeare lovers out there? Or am I merely wallowing in my own enjoyment of him?