Tiberius, on the Sea of Galilee in Israel, a Saturday about twenty years ago; the Sabbath. Everything stops in Israel on the Sabbath (actually, it doesn’t, but that’s another story); there was nothing to do in Tiberius. With another Englishman I’d met along the way, fed up, wanting to be somewhere else and unable to get there we found nothing open: no bars or shops – nothing. Sitting on a wall by some traffic lights near the centre of town after spending most of the day, first trying to leave and then find something to do, this Sabbath caught us out, surprised us. We ended up at the harbour, found some old bits of discarded fishing line and made a hook from a piece of wire and put some stale bread on the hook. You could see fish in the clear water of the harbour. After much ingenuity and patience we caught a fish, the highlight of the day.

But back to the traffic lights, fascinated by the impatience of many Israelis, supposedly enjoying their day of rest, we watched their actions as they queued. The traffic lights were free flowing; there were no delays beyond what the lights required, a few seconds to allow the crossroads traffic to move in the other direction. Used to the apparent irritability of the drivers everywhere here, now we could observe it scientifically. Hands did not stay off the horn for very long; a constant cacophony of horn blowing, for no reason. We watched a queue of traffic from our side of the lights, never more than seven or eight cars; you didn’t have to wait long before the lights changed. As soon as the lights changed to green, the absolute split second, all those waiting behind the first car started honking their horns for it  to move. They didn’t give the car a chance, waited less than a second before they started blaring away as soon as the lights changed, shaking their heads, talking to themselves and the driver in front, hunched over the steering wheel in their anxiety to be somewhere else. Not many of the drivers could have been going far.

We decided to count how long the silences lasted (remember, there was no need to use the horn at all – the traffic was free flowing). Seven seconds was the longest period of silence while we were there, and we were there for a long time. I don’t think a car horn is a very pleasant sound; it’s supposed to be a warning, and it’s quite irritating to listen to, especially when it’s constant, doubly so when there’s no need for it.

Seven seconds. That was not a good day. Until we caught the fish.

Cubans honk all the time but it’s mainly a form of exuberance, a need for noise. Horns are honked partly to warn other traffic or pedestrians, but such is the driving skill, from bicycle taxis to lorries and buses, that tooting as a caution is rarely required. Parts of Havana and Cuba are fairly advanced in terms of traffic signs and lights, but many parts are practically free-for-alls; take into account that many cars don’t have lights, indicators or cannot get above thirty miles per hour, and one realises that Cubans have developed a sixth sense when negotiating traffic. Nevertheless, they honk pretty often. 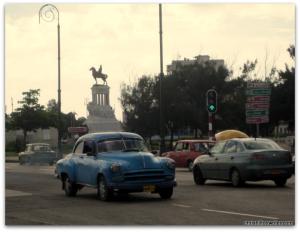 Musical, novelty, multi-sound horns are a boon to Cubans and a curse to the very few (me) who can’t stand them. I am used to general noise in Havana and normal honking sounds punctuate the day. They are nothing like as relentless as in Israel and nowhere near as annoying, but I find the multi-sound horn irritating. It rises above the usual hustle to impose a strange, loud and unique sound; it suddenly disturbs. Cubans absolutely love them. There is an unconscious need for noise in Cuba; they are comfortable with noise; they like to be talking, shouting, laughing, and extraneous noise not only does not bother them, they welcome it. It seems to be part of the Cuban psyche. Freud once said that the Irish are impervious to psychoanalysis – I don’t think he ever visited Cuba – for the same almost certainly applies to them.

At night when Havana is almost quiet, when silence almost reigns, say three or four o’clock in the morning, perhaps a Tuesday, you can guarantee that a Cuban with his new la cucaracha musical air horn will give it full blast and break the silence. There will be no concern for waking anybody. I have never seen Cubans give the slightest thought to neighbours in terms of noise; it is as though noise is preferable to silence. Nobody notices it; nobody complains about it.

I have grown fairly used to the noise over the years. I only notice it here because I am often writing, and have had that perfect sentence dashed quite a few times by La Bamba, Wedding March or Cavalry Charge musical, super loud air horns. I can swear loudly, curse my own impatience, accept that I’m in Cuba and that it’s just inevitable – and just get on with it. And however one handles it, it is certainly better than the impatient all-day honking in Tiberius.